Researchers from the hydrodynamics and coastal infrastructure group of the Environmental Hydraulics Institute of the Universidad de Cantabria (IHCantabria) have carried out a laboratory test to study the hydraulic behaviour of a pumping station for a desalination and energy plant in Bahrain. This type of study, in this case commissioned by the Spanish company Idom, “allows us to optimise the design of hydraulic structures, saving important economic costs and avoiding problems that are difficult to correct once construction work has begun”, explains the UC professor and head of the Hydrodynamics and Coastal Infrastructures research group at IHCantabria, Javier López Lara, who is also responsible for the work together with Francisco Jaime, member of the institute.

After several weeks of work, the physical modeling tests of a pump house, for the second construction phase of the Al Dur plant, has been successfully completed at IHCantabria’s facilities at the request of Idom. The Al Dur II IWPP (Independent Water and Power Project) is a project for a water and power production plant located in Al Dur in the Kingdom of Bahrain. The plant will have the capacity to generate 1,500 MW of energy based on combined cycle gas turbine (CCGT) technology and produce 230,000 liters per day of water through Seawater Reverse Osmosis (SWRO) technology.

The objective of the tests has been to evaluate the hydraulic performance of one of the pumping stations to determine the nature and severity of any adverse conditions that could affect the performance of the pumps and the entire approach and channeling structure of the intake system.

To accomplish this objective, the area of effect of the pumps and the entire piping and pumping system has been physically reproduced on a scale of 1:5.5. The model has been built using traditional construction techniques and 3D printing for the proper representation of the singular elements of the system. This has been done and tested entirely in the facilities that IHCantabria have specifically for the study of this type of systems in Santander, Spain.

In order to evaluate the hydrodynamic performance of the structure, a series of tests have been carried out in which different critical operating modes of the station have been combined. By observing and measuring the flow behavior in the pumping area, it is possible to verify whether the performance of the entire system is adequate for each operation. The results have been contrasted following the American standards ANSI-HI 2018, reference manual in this type of designs.

The performance of this type of study carried out by IHCantabria allows us to deepen our knowledge and analysis of this type of hydraulic structures and to optimize their initial designs. This allows for significant economic savings when building the structures and avoids possible problems that are difficult to correct once construction work has begun. 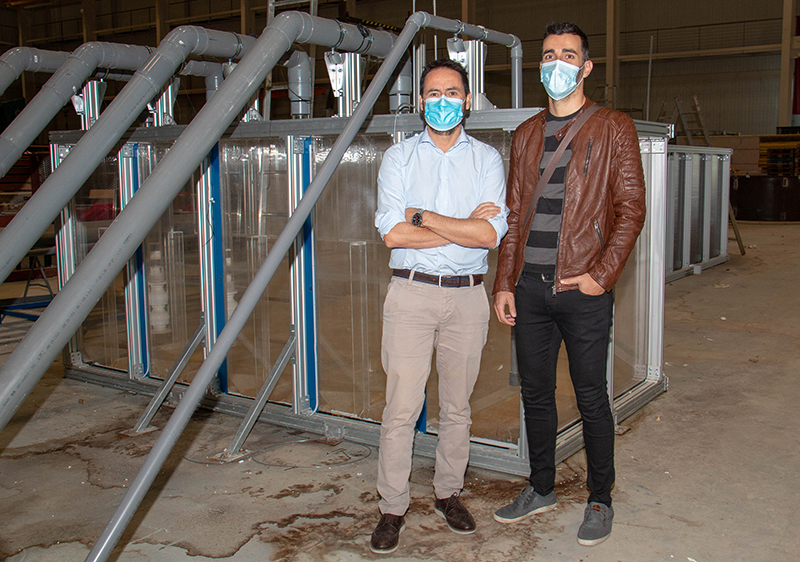