The early warning system for the prediction of coastal flooding events developed by IHCantabria in the municipality of Garachico (Tenerife), proved its effectiveness during the storm caused by the “Epsilon” storm 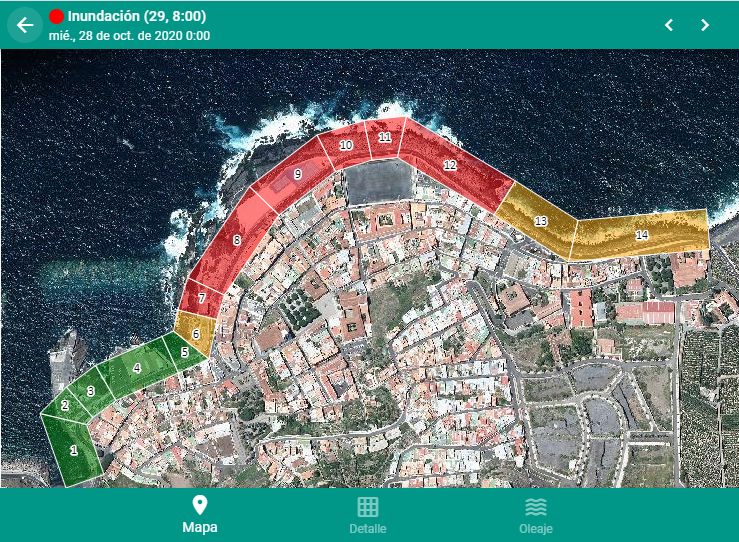 The Environmental Hydraulics Institute of the University of Cantabria (IHCantabria) is developing, together with the public company of the Canary Islands Regional Government GRAFCAN, attached to the Ministry of Ecological Transition, Climate Change and Territorial Planning of the Canary Islands Regional Government, an early warning system for the prediction of coastal flooding events in the municipality of Garachico (Tenerife).

To achieve this objective, the Hydrodynamics and Coastal Infrastructure group of IHCantabria has develop an automatic and modular system to predict potential overtopping events along the coastal front of the municipality.  For this purpose, a high-resolution methodology has been applied that makes it possible to know, hourly and with a time horizon of 3 days, the risk of flooding in each of the 14 sections into which the Garachico waterfront has been divided. By means of the joint use of statistical and numerical techniques, the prediction of the wave in deep water locations, provided by government agency Puertos del Estado, is transferred until each one of the objective locations along the Garachico coast. For a reliable reproduction of the interaction of hydrodynamics with the coast, predictive formulations have been fitted. This is a fundamental fact for the fulfillment of the project’s objective, given the high complexity of the study area.

The tool developed at IHCantabria is currently in the operational phase. Throughout the phases of the project, it has been possible to calibrate and validate both waves and the flood predictions, by installing instrumental measurement devices. The degree of reliability and precision achieved has been contrasted in the storm caused by the storm “Epsilon”, which affected the Canarian coast on October 29, 2020.  With the tool developed by IHCantabria together with the company GRAFCAN, both those responsible for Civil Protection of the Government of the Canary Islands and the local police of Garachico City Council have been able to plan sufficiently in advance measures of preparation for the reduction of potential risk situations in the population.